Co-founder and CEO of 54gene, a Nigerian health tech company in Nigeria, Dr. Abasi Ene-Obong has resigned from his position.

To take over from him is the startup’s General Counsel, Teresia L. Bost. She will serve as the interim CEO, Dr. Abasi will continue to support the company as Senior Advisor and remain on the Board of Directors.

“Teresia and Delali bring decades of experience in building and scaling high-impact global pharma companies, and they also have deep insight into the workings of 54gene. I am excited to see them take the company to its next phase,” Ene-Obong said.

Also read: Eke Urum, CEO of Risevest Steps Aside on Allegations of Abuse of Power and Sexual Impropriety

Why is 54gene CEO Stepping down

The reason why Dr. Ene-Obong is stepping down is not clear. It could be as a result of the allegations of financial impropriety made against him since the recent layoff. This has however no been proven.

It was also reported that Ene-Obong’s resignation came just a month after the co-founder and Vice President, Ogochukwu Osifo announced his departure from the company.

Osifo via LinkedIn post said he was leaving to pursue other interests. His LinkedIn profile has been updated to include a new role as “Chief Executive Officer at Rayda.” 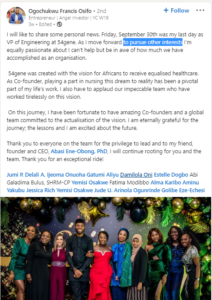 With Ene-Obong’s resignation as CEO and Bost taking over, 54gene said it will now focus “on it’s core mission of Africa genomics research and equalizing precision medicine.”

It also says it plans to restructure its business across a number of departments and geographies and will conduct a second round of layoffs.

It was recorded that the health startup had laid off 95 employees in August as revenue from covid-19 testing  became less.

Fintech Week: The end of the beginning- Mayowa Kuyoro