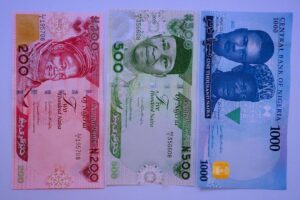 This came after the Central Bank of Nigeria (CBN) Governor, Godwin Emefiele disclosed that the president would unveil the new notes today.

The purpose behind the newly redesigned naira notes is due to the higher rates of the counterfeiting of N500 and N1,000 naira notes.

Currently, Nigeria is battling a recording-high inflation rate. This is attributed to the increased amount of money in circulation.

According to data from the CBN, Nigeria’s broad money supply rose past the N50 trillion margin in October. This is the highest level on record.

The same applies to the currency in circulation as it is stated at N3.29 trillion. This increased by over N855 billion between January and October 2022.

This is an indication of currency hoarding which has kept monetary policies somewhat ineffective against the rising cost of goods and services.

For the old naira notes, it will remain legal and valid till January 31, 2023, while circulation of the new naira notes begins immediately.

Commercial banks in the country have also been instructed to work on Saturdays till the deadline date. This is to let customers return their old naira notes.

You have 69 days to return your old naira notes in exchange for the new naira notes. Note that no extension grace will be given to defaulters.

The CBN governor stated that clearly in his briefing at the monetary policy communique held on November 22nd, 2022.

According to the CBN, the new naira notes will help to reduce the volume of currency in circulation, hence curbing the rising inflation rate.

The Future of Fintech In A Staggering Economy

Data To Take Over Voice Revenue For...