Ride-hailing company, Uber, is now offering electric vehicles (EVs) called Comfort Electric service in 24 cities in the United States and might soon be coming into Nigeria. It allows users to request rides in electric cars such as Tesla Model 3, Polestar 2, and Ford Mustang Mach-E. 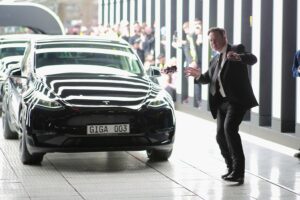 The ride-hailing startup did not end there, they went as far as offering this enticing service to Vancouver in British Columbia. The new release service, first launched in May in some cities allows users to request extra legroom and other top features for a 20-40 percent over Uber X trips.

Last year, Hertz announced that it would order 100,000 cars from Tesla, but promised to make 500,000 cars available to Uber drivers for rent.

Countries where the Comfort Electric is Available

This service is a good investment for Uber as California is likely to ban gas-burning cars by 2030. This is building towards a community with zero-emission. Uber also promised to spend the sum of $800 million. This is to help drivers transition to all-eclectic cars by 2025. We hope they achieve that.

Tesla Owner and business mogul, Elon Musk, has been known as a controversial personality since he came into prominence. From planning to open a hotel in space to appearing at interviews stoned, there is so much to say about the Tesla boss.

With many flaws and controversies, he has not disappointed us with his tremendous acquisition and wealth accumulation, as he tops the list of the richest man in the world.

He is a man of foresight, having acquired Tesla in the year 2004 and now boasts of close to 900 billion dollars (#391.9 trillion) yearly. Before now, Tesla was not known to the world. Not until Elon Musk became the Chief Executive Officer CEO).

According to Elon Musk, the mission behind Tesla is to accelerate the advent of sustainable transport by bringing mass-market electric cars to market as soon as possible. This mission has been the backbone of the ride-hailing company’s success.

On every rental, Tesla makes the sum of $4.2 billion which is recorded as the largest purchase to date.
That is a whooping #1.8 trillion added to Elon Musk.
As part of the contract, Tesla Model 3 cars will be available. It will also be at other locations from next month and the cars will continue to roll out across the United States and Europe throughout 2022.

What This Means For Nigerians

When the service is launched in Nigeria, it would help reduce the amount of daily air pollution in the country. It
would also help to reduce the numbers of hours Nigerians have to queue to get fuel due to fuel scarcity.
However, Nigeria is not new to electric cars. Stallion Group produced the first-ever Electric car, which was called
Hyundai Kona. Hence, a partnership between the car producer. This will help boost the economy and give the country more recognition across the globe.
Visit Tehkudi for more news
Electric carsElon MuskHertzTeslaUber
0 comment
0
FacebookTwitterLinkedinWhatsappEmail

iPhone Vs. Samsung: Which Is The Greatest